Other than the obvious, the function of this electronic steering wheel is to control several sub-systems of the car, that includes a radiator fan, the drag reduction system and variable geometry intake manifold. To get a brief idea, first watch the video below and then continue.

The setup can be divided into 4 levels of hierarchy. Consider the diagram below: 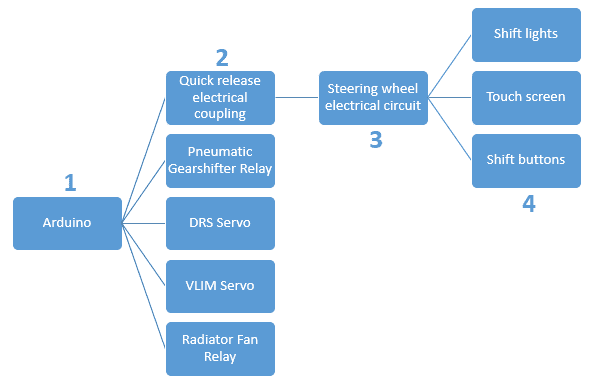 Apart from the quick release electrical connector assembly which i've already discussed above , the main components of production are the base frame and the cover boxes. The base frame of steering, as visible in the images, was made using carbon fibre. Three layers of carbon fibre on either side of a foam core were bagged using resin infusion technique. After drying all the epoxy, the part was sent for wire cut where the slots for thumb and the external profile were cut on the base frame. As for the cover boxes, 2mm PVC sheets were used, which were then again sent for wire cut to get the desired profile. After the machining, both the base frame and the cover boxes were assembled using nuts, bolts and a lot of epoxy. 😛

Below is another video made during the time of manufacturing. Making car sounds is always fun.😃